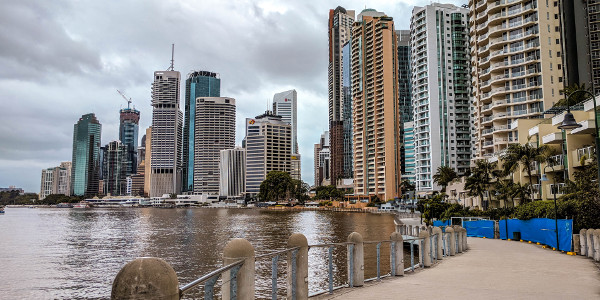 Brisbane is a city near the east coast of Queensland in Australia. We were pleasantly surprised by Brisbane. We had no expectations at all, but it turned out to be a lovely urban city with many things to do and to see, that are often for free as well! Read on to find out our complete 4-day itinerary of Brisbane.

On our first day in Brisbane, we decided to just stroll around the city and explore without having planned where to go. This seemed our best option given that we had a night flight and therefore hadn’t slept at all. To get to the city center from our hotel, we had to walk past the Brisbane River which is a very nice walk.

After a brief stop in the city center, we decided to walk along the South Bank of the Brisbane River. There is lots to see and do at the South Bank. The first thing you’ll see is the Wheel of Brisbane. Next to the Wheel there are beautiful arches with greenery and flowers which work very well for Instagram photos. These are the South Bank Parklands. You’ll walk past a Nepalese temple, a food court (which reminded us a lot of Asia) and an open-air public pool (Streets Beach). In the weekends, the South Bank is a very popular place with locals. The South Bank is also a perfect place to cool off on a hot day in Brisbane. 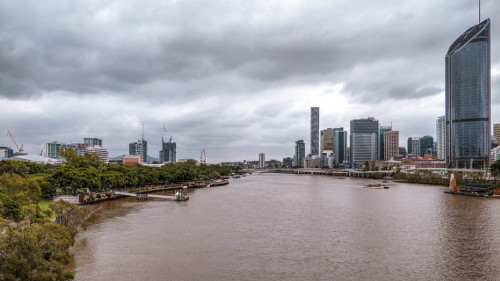 From the South Bank, we took the Goodwill Bridge to the City Botanic Gardens where we wandered around for a while. The City Botanic Gardens felt more like a city park as the place is very green with large open grass fields and we missed some colorful flowers. But it’s always nice being in green places. The Brisbane City Botnic Gardens are opened 24/7 and there’s no entrance fee, which makes it a fun and cheap activity in Brisbane. 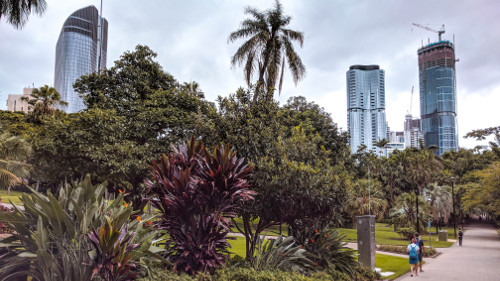 We discovered a Vapiano restaurant in Brisbane. We often go to Vapiano back home and really missed their pizzas so of course we had to eat there that evening. If you haven’t heard of Vapiano before, you have to check it out. It’s not anything fancy, but the food is good and not expensive which makes it perfect! 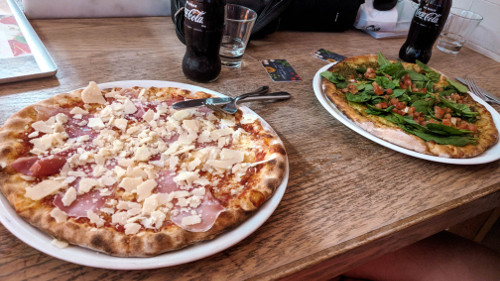 As we walked already quite a lot on our first day and we still were very exhausted from our flight, we took it easy on our second day. We slept late and grabbed some Starbucks for breakfast on our way to the city center. We hung out for a while at the King George Square, which is the perfect place for that. It was also something we found out we missed, as it’s not very common for people to sit outside at a square in South East Asia because of the heat. We visited when the Australian summer was ending, and even though it was hot (above 30 degrees Celsius), we loved that it was less humid than in most of South East Asia. After that we wandered around the shopping streets of Brisbane and checked out some stores. 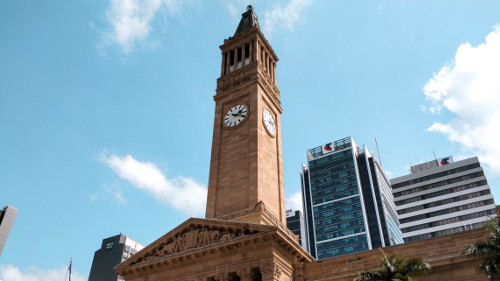 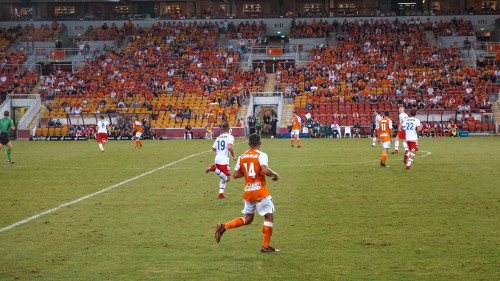 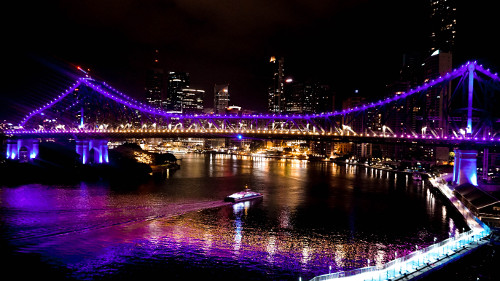 On our third day, we went to the Gallery of Modern Art, which was lots of fun. The whole area surrounding the Gallery looks very nice and the architecture is beautiful. When we visited there were some nice collections. One was based on the Asian cultures and societies, which we had grown to be quite familiar with in the past few months. Having lunch at the Gallery’s restaurant is very recommendable as well. It’s a nice area by the water with lots of green and the food is very good! As there is no entrance fee to the Gallery of Modern Art, it is a perfect free thing to do in Brisbane! 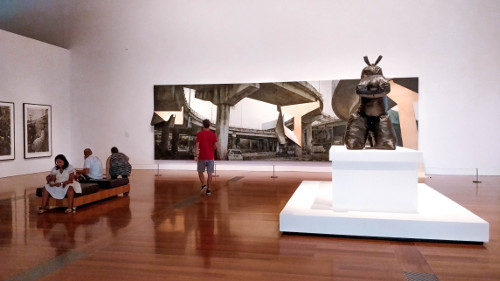 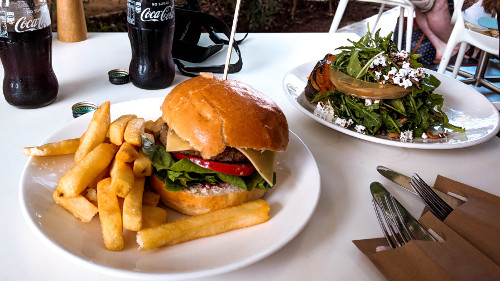 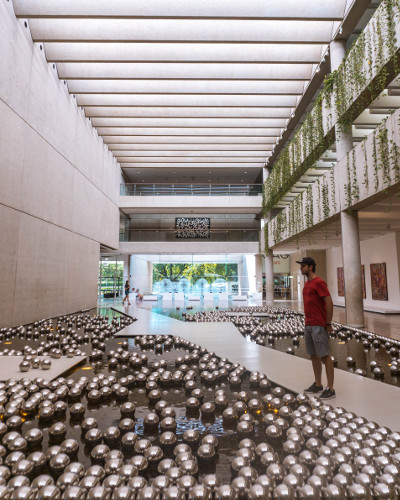 From the South Bank we took the ferry to the Northshore to go to Eat Street. Eat Street is a food festival with lots of different cuisines and many (Instagrammable) foods. The whole area is decorated very nicely with lots of lights and colors. It’s a perfect place for Instagram photos. We had some very nice-looking (and tasting!) ice creams and we had Greek food for dinner (Gyros, anyone?). Even though it rained a few times, we had an amazing evening. Eat Street is a bit out away from the city center, but it’s easily reachable by ferry. 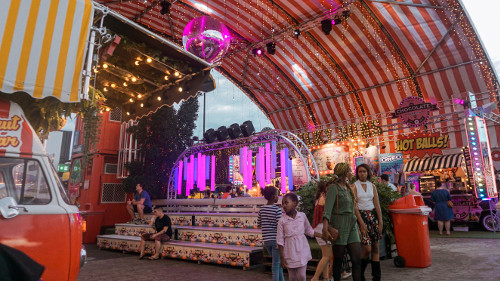 On our fourth day we visited the Lone Pine Koala Sanctuary. The sanctuary is home to 100 native Australian wildlife species. It’s the perfect place for foreigners to see Australian wildlife they’ve never seen before and for everyone to learn about these animals and their natural habitats. We saw many different species for the first time. There is a daily program where you can get to know more about a certain species and are free to ask whatever questions you have. We went to see the sheep dog show where a shepherd showed us how he trains his dogs and what actions affect the sheep in what way. We also went to a feeding session of the Tasmanian devils where the keeper told us more about these animals.

In the sanctuary, you have the opportunity to hold a koala. If you want to do so, you need to buy a photo ticket for AUD 25. A professional photo will be taken by someone of the sanctuary which you get on print, but can also download digitally with your personal code. After the professional photo is taken you’re allowed to take a picture with your own device as well. You get to hold the koala for a very short amount of time and after the photos are taken you need to give it back to the keeper. They switch a lot between the koalas and every koala isn’t being held for more than 30 minutes a day. 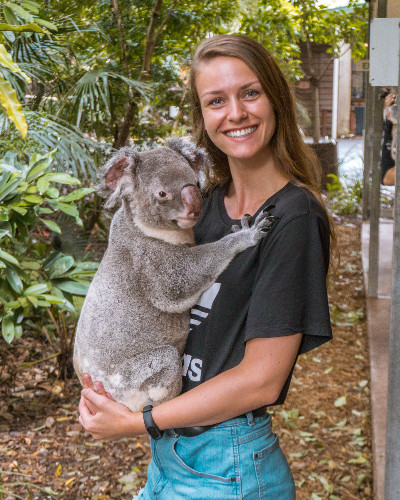 The highlight of the sanctuary is the Kangaroo Reserve where 150 kangaroos and wallabies roam freely. You can purchase a bag of kangaroo food to feed them if you’d like, but you don’t necessarily need this to have them come close to you and pet them. The kangaroos are very relaxed and will hang around you once they feel comfortable. We spent so much time in this place petting all the kangaroos that wanted to be. There’s a resting space for the animals in the back where humans aren’t allowed. 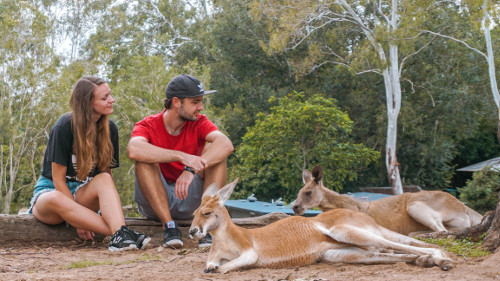 We spent an entire day at the sanctuary and had a very good experience. The Staff is very attached to the animals and we love it how approachable and accommodating they are. The sanctuary is all about education about these animals and about how to preserve their natural habitats. The sanctuary is a bit out of the city center but there are a few bus lines that stop right in front of the entrance, which makes it easliy accessible by public transport.

We mostly walked around Brisbane as everything is very easy to get to. We used the public transport twice: to go to Eat Street by ferry and to go to the Koala Sanctuary by bus. Using public transport was very much like Europe. You just buy a ticket once you get on the ferry or bus. We used Google Maps to check the time tables, and those were accurate as well. When traveling by bus during peak hours, some delays can happen though due to traffic.

Have you ever been in Brisbane? Let us know your thoughts about Brisbane in the comments below!

10 Most Instagrammable places in Brisbane

Free things to do in Sydney: Our 7 favorite places

5 places to eat in Sydney on a budget

Things to do in and around Bondi Beach