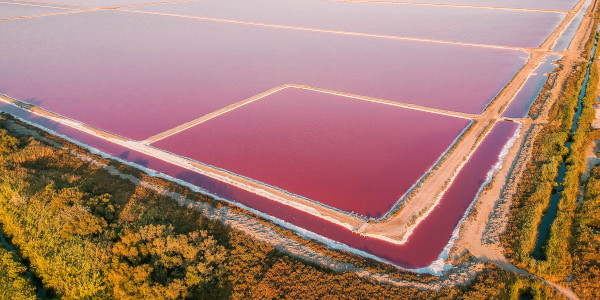 Ever since Mika found out about the pink salt pans in France, she has been dying to go there. During our trip to the Provence region, we made sure to plan a visit to these pink lakes. The bright pink water is absolutely stunning! However, it is quite difficult to get close to the water (at least it was for us). It took us two evenings to find the correct spot. To save you this time, we’re sharing everything you need to know about visiting the pink salt pans in South France and how to get close to the pink lakes without a tour, including step-by-step directions!

You can find the pink salt pans in and surrounding the National Park Camargue. After doing some research before our trip, we found out that there are basically two locations for the pink lakes: Salin-de-Giraud and Salin d’Aigues-Mortes. We also found out that it wasn’t possible to visit Salin d’Aigues-Mortes without a tour. As we wanted to visit the pink lakes in the evening, this wasn’t an option for us. We read on SolarPoweredBlonde’s blog that we could get close to the pink water in Salin de Giraud in the evening without being on a tour, so we decided to go there. Why are the salt pans pink?

Certain types of algae are typically found in highly concentrated salt water. Dunaliella Salina is the type of algae living in the salt pans in South France. To protect themselves from the sun, Dunaliella Salina synthesize beta-carotene, which is a substance that makes the water turn pink.

The salt pans aren’t pink all year round, so check before you visit to avoid disappointment. An easy way to check whether the salt pans are pink is to check location-tagged Instagram stories in Salin de Giraud. Your best bet is during summer! We couldn’t find the exact location where we could enter the pink lakes, so we looked on Google Maps and saw a spot called “Salt Pan Observation Mound”. We decided to drive to that spot and see whether we could enter the lake from there. There was a little hill from where you could see the pink lakes from a distance. At the bottom of the hill, there were some signs about the available tours (either by bicycle or on foot) including the prices for those tours. There were lots of walking paths surrounding the hill, so we walked past the hill trying to get closer to the water. Seemingly out of nowhere a security guard popped up and told us we weren’t allowed to go there. We were only allowed to get up the hill and see the pink lakes from up there. Ever since that moment, she was watching us closely so we decided to take a few photos from up the observation hill and drove away. We looked on Google Maps again and tried to figure out some other spots from where we might be able to get closer to the water. Based on the roads visible on the map, we decided to go to this spot. There was a small parking lot nearby where we parked the car after which we tried to walk to the lakes. We could walk until this spot but there was no path across the water, so we were unable to get closer. We flew the drone from here and saw that the water was indeed pink. We took some shots with the drone, but didn’t know what else to do. Disappointed, we decided to give up and drive back to our Airbnb in Aix-en-Provence. Even though we were unable to take the photos we had in mind, we drove past a huge sunflower field on our way back. The sun was about the set and the light was beautiful. We took some amazing photos and flew the drone here. This is the location of the sunflower field. You can see the sunflowers from late June through July. Mika couldn’t get it out of her head that we couldn’t get close to the water. It was one of the reasons she wanted to visit the South of France and just something she was so excited about. Fortunately, Kriszti from She Wanders Abroad, who was at the pink lakes just a week before, was able to send us the coordinates of the place she went to. We decided to try again two days later. These are the coordinates. As the road to get to the pink lakes is a bit unclear, we’re going to guide you there step-by-step, so you can be sure you’re at the right spot. First, we just followed the directions on Google Maps to the coordinates. When we saw we were going to drive up to a gate, we took a left turn and parked the car on a patch of grass in front of a house. The gate, before which we took a left turn From our parking spot, we walked on the path in the southern direction and took a right turn and then took the first turn left. This way, we avoided the gate, but it’s also possible to walk back to the gate as you can enter through the gate on foot. The way we took from our parking spot

At the gate you’ll see multiple signs. We translated the French signs for you. Signs at the gate The second and third sign state information about visiting Salin de Giraud in both French and English. According to the sign, you can buy tickets at the Tourist Offices in Arles and Salin de Giraud, as well as at the viewpoint in Salin de Giraud in July and August. We’re not sure what viewpoint they mean, they might mean the viewpoint we were at a few days before. We visited both places in the evening and we didn’t see a ticket office. Once through the gate, head straight ahead in the southern direction. You’ll walk past a sign on your right and another gate. Walk past this gate

Continue going straight ahead and you’ll walk past an abandoned barn on your right. Keep the barn to your right

You have to cross a pink river on wooden planks. There’s another abandoned barn on your right, just continue walking straight ahead and keep the barn to your right. Keep the barn to your right

Now it’s going to look even sketchier than it already did. Cross another salt river by walking over wooden planks and turn right. Now you’re walking straight towards the pink lake. You have to cross another river using the wooden planks. Cross the river here again. You see the pink lake in the background.

Walk over the small hill and you have arrived at the pink lake! Make sure to check the brightness settings of your drone and correct them if necessary. This is especially important if you can’t shoot in RAW with your drone (like we can’t). The auto brightness on our drone (DJI Spark) was way too bright. You could still see the pinkness of the water, but our bodies were white dots on the screen. It improved a lot after we corrected the brightness in the settings.

When we were there, it was very windy which made it harder to fly the drone. There are no high objects near which makes it easier to control the drone (and avoid flying into something). Keep the wind in mind when planning your flight. For instance, start by flying against the wind direction, so your drone can return easily later when its battery depletes. If you’ve flown in the same direction as the wind, you might have to battle the gusts on an empty battery, and risk your drone falling in the (pink) water. Walking in the water

The shore of the lake is filled with salt and walking on it is pretty painful. Be careful when walking on the salt barefooted, as you can easily cut your skin. It’s less painful to walk on the part where the water meets the salt shore, where there’s just a small layer of water. If you’re going further into the water, you’ll notice your feet sink into the salt a bit. It gets more painful again walking further into the water. During our first visit to the pink lakes, we were eaten alive by mosquitos. There are mosquitos everywhere in this region. When we stopped at the sunflower field on our way back, there were entire mosquito swarms flying around us. During our second visit to the pink lake, we didn’t see a single mosquito. This was probably because it was so windy. We could even hardly stand still because of the wind, so it must have been hard for the mosquitos to fly. Nevertheless, put on mosquito repellent before visiting to the pink lakes. You will not regret it. We didn’t and we woke up multiple times that night because of the itches, haha. We hope we’ve inspired you to visit these beautiful pink lakes, we can absolutely recommend it! Are the pink salt pans in South France on your travel bucket list? Let us know in the comments below!

The Most Instagrammable Places in Bordeaux

Camping in South West France: A Summer Getaway in Montalivet-les-Bains

Things To Do in Arcachon Bay: A One-Day Itinerary