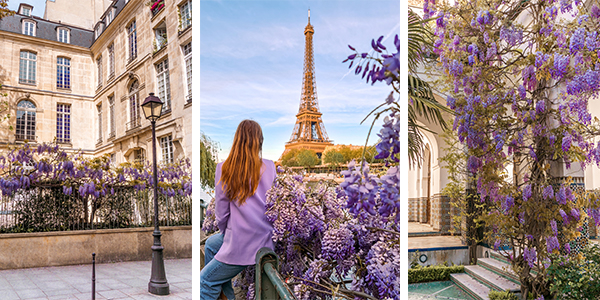 Paris in wisteria season is truly magical. We love a beautiful city with plenty of purple wisteria blooms, and Paris delivers! The purple rain creates so many Instagrammable spots in the city. In this blog post, we’re sharing the best ones we’ve found in Paris, including the exact locations.

Blooming period of wisteria in Paris

In general, the wisteria in Paris start blooming mid-April. The blooming period only lasts for about two weeks. The exact blooming period is dependent on the weather conditions and it can also differ by location. If it has been relatively warm for the time of year, wisteria bloom earlier and if it’s been relatively cold, the bloom starts later. We were in Paris from the 15th until the 18th of April 2022 and we stumbled upon a lot of wisteria in their peak bloom, so the blooming probably started around a week before we were in the city. This is relatively early and we didn’t expect to find so many blooming wisteria during our stay.

Tip: search for a specific location on Instagram and check the recent posts to see whether the wisteria are blooming. Be aware of throwback posts though. Usually you can make out from the caption whether it’s a throwback or not. This way you don’t have to travel to a specific wisteria location, only to find out all the blooms are gone. We use this trick with all kinds of seasonal Instagrammable places around the world.

When walking along the Seine from the Pont de Bir Hakeim and the Pont d’Iéna you’ll find these beautiful wisteria on your right hand side. We are obsessed with these wisteria in combination with the Eiffel Tower view. During our visit, the wisteria already started losing their flowers. So the wisteria here start blooming pretty early. The Grande Mosquée de Paris has a stunning garden that turns purple every spring. We found out about this spot during our stay in Paris and thought it was a hidden gem. It’s definitely a gem, but apparently not that hidden. After our early-morning visit we saw videos on Instagram of crowds in the garden by 10.30 on the weekend. We visited the mosque right after opening time at 09.00 (also on the weekend) and there were only a handful of people. It might be a good idea to head there early.

Even without the wisteria blooms, the garden is absolutely beautiful. So if you’re visiting Paris outside of wisteria season, it’s still worth stopping by the mosque.

As it’s a religious site, make sure to act respectfully and wear appropriate clothing (cover your shoulders and knees). The fence in front of the Maison Européenne de la Photographie is beautifully decorated with bright purple wisteria. You can literally walk through a tunnel of wisteria here. This is definitely a spot you can’t miss! On a sunny afternoon, we walked by the restaurant Au Vieux Paris just to check out the wisteria facade. While standing in front of the restaurant, we decided to have a drink, because why not!? The facade is beautiful, especially in combination with the old building and the blue and purple outdoor seats and tables. It all matched so perfectly!

During the day, it’s pretty hard to take photos here. The restaurant is located near the Notre-Dame de Paris in one of the most crowded arrondissements of the city. There are constantly people walking by and of course sitting down at the terrace. So if you want to take photos, head there early in the morning or have an afternoon drink at their terrace. When sitting down, it’s easier to block out people or wait for the right timing to take your photos. Next to La Maison Rose

While we were shooting the beautiful restaurant La Maison Rose and the Instagrammable street Rue de l’Abreuvoir, we noticed wisteria blooming on the building next to it. Unfortunately, we hardly paid any attention to this spot as we were so busy getting the right shots of the other two places. The photo below actually is a crop from our photo of La Maison Rose. Don’t be like us and also take some time to enjoy the beautiful wisteria facade. Square Marcel Bleustein Blanchet is a garden located close to the Sacré-Coeur. We checked out the garden, hoping for some blooming wisteria but unfortunately came back empty-handed. Everything in the garden was still green and it looked pretty dull. We didn’t even bother taking a photo, haha. We guess for some of the wisteria in Paris, mid-April is still too early.

We hope we’ve inspired you to visit Paris in spring. It’s one of the most beautiful seasons to visit the capital of France. Is seeing the wisteria in Paris on your travel bucket list? Let us know in the comments below!

Visiting the Cherry Blossoms in Parc de Sceaux near Paris

The Best Lavender Fields in Provence

The Most Instagrammable Places in Bordeaux