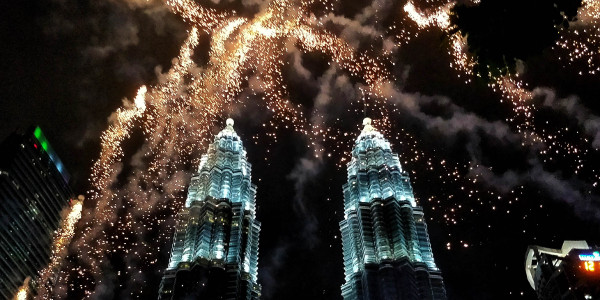 The New Year’s Event started at 9PM and included performances of various Malaysian artists and a fountain show. There were a lot of long breaks between the performances, which was a bit of a pity. Right before the clock turned 12, there was a countdown and the fireworks show started immediately at 12 o’ clock. Being surrounded by tall buildings, KLCC Park wasn’t the right spot to watch the fireworks though. Our view of the fireworkd was almost completely blocked by trees, which was a bit unfortunate. Luckily, they would sometimes light some fireworks in front of the Petronas Towers, so we were still able to get some good photos of both the Petronas Towers and the fireworks. 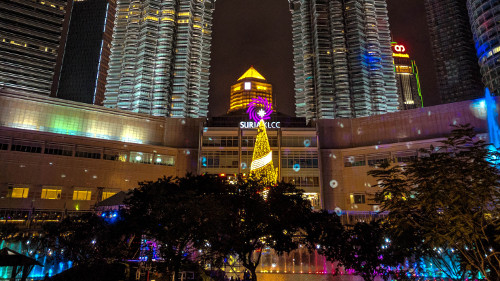 The fountain show from our point of view 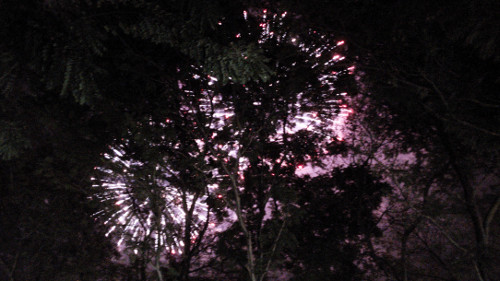 Our view of the fireworks

All in all, we had a great night and we were happy we got to see fireworks at New Year’s. Starting the New Year without fireworks is just a weird feeling (we once experienced this when we were in Valencia). If you’re ever in Kuala Lumpur at New Year’s Eve and decide to go to the KLCC Park, find a spot facing the stage (with your back facing the Petronas Towers) so you can watch the performances and you have a better view of the fireworks. Try not to arrive too late because it gets pretty crowded after 9PM and at some point, you won’t be able to enter the park because it’s too crowded. If you really want a good view of the New Year’s fireworks in Kuala Lumpur, make sure to get tickets for a rooftop party in the area of the Petronas Towers. Even though we had a fun night, we will always prefer celebrating New Year’s at home with friends!

Where is your favorite place to celebrate New Year’s? Let us know in the comments below!

Things to do in Langkawi: A summer getaway

Things to do in George Town: A first-timer’s guide to Penang

Things to do in Kuala Lumpur: A complete sightseeing guide