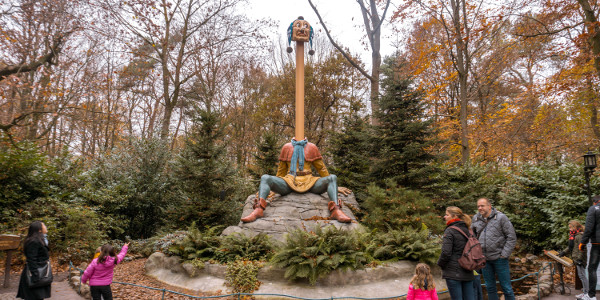 We would really recommend going to the Efteling in winter, as the Winter Efteling is just a special experience. However, the Efteling is open 365 days a year and it’s always fun to visit the theme park. When visiting the Winter Efeling, make sure to dress in layers of warm clothes as you’ll get cold walking outside the entire day. The Efteling is a perfect day trip from Amsterdam, as it takes less than two hours to get there by public transport!

The park is divided into five realms: Marerijk, Reizenrijk, Ruigrijk, Anderrijk and Fantasierijk. We share with you some of our favorite rides and landmarks of the realms.

One of the most famous landmarks of the Efteling is the Fairytale Forest (Sprookjesbos). In the Fairytale Forest, different fairytales come to life. See Little Red Riding Hood knock on her grandmother’s door, peek inside the Seven Goats’ living room, or watch the Sleeping Beauty sleep. Over the past decades, many fairytales have been added to the Forest and more will continue to be added. It’s an awesome place for kids, but also for grown-ups (especially if you’ve been there during your childhood). With or without kids, it’s absolutely worth it walking through the Forest and see what the hype is about. 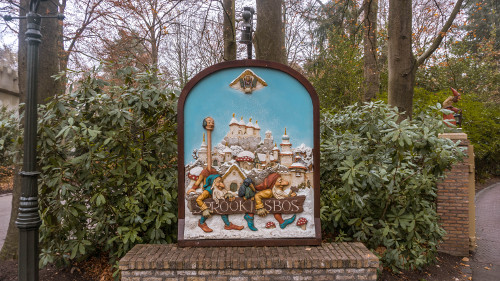 Most of the attractions in Marerijk are well-suitable for children. Droomvlucht is one of the oldest rides in the Efteling and is a must-go. It’s a dark ride through a beautiful dream world with fairies and magical creatures. Villa Volta is a cursed villa with a main room that appears to turn upside-down, and is also worth visiting. 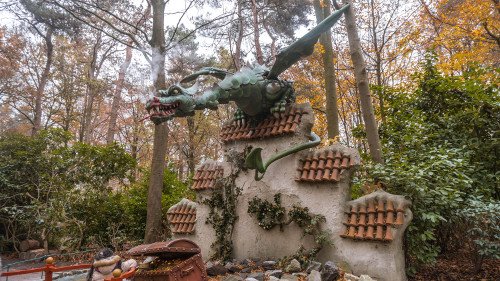 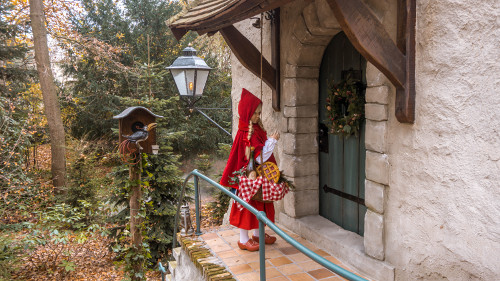 Most of the attractions in Reizenrijk are located on the Carnaval Festival Square. There’s a bonfire in the middle of the square during the Winter Efteling to warm yourself up. We were surprised how nicely warm you get from the bonfire. It’s also the perfect spot for having a ‘broodje Unox’ (sandwich with a Dutch sausage), which is a must-eat when in the Winter Efteling. 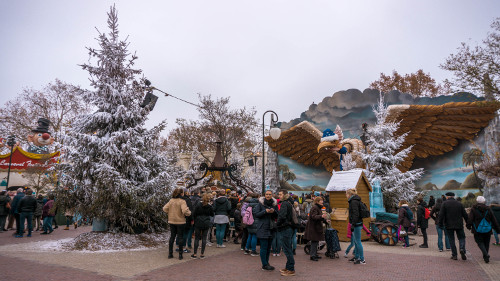 Bonfire at the Carnaval Festival Square

Recommended attractions in Reizenrijk are Carnaval Festival and Vogel Rok. Carnaval Festival is a fun dark ride which takes you around the world in eight minutes. The soundtrack of the ride will be stuck in your head for the rest of the day, or week. Vogel Rok is an indoor roller coaster and is completely dark so you have no idea where the ride is going to. Monsieur Cannibale is a spinning cauldron and is Joop’s favorite ride. He’s probably the only one, because the line for this ride is often short. Another attraction in Reizenrijk is the Pagode which is an observatory platform that rotates in the sky at a height of 45m and offers panoramic views over the entire theme park. During the Winter Efteling at night, it’s beautiful to see the park illuminated by all of the (Christmas) lights. 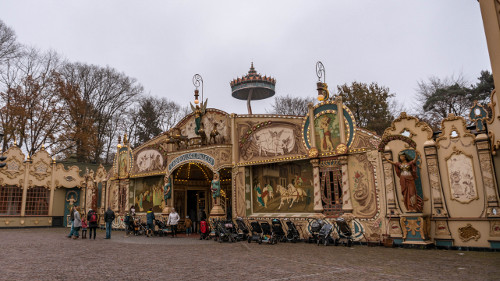 Building of the historic carousel and the Pagode in the background

During the Winter Efteling there’s an ice-skating rink located in Reizenrijk. The IJspaleis (Ice Palace) is beautifully decorated with Christmas trees and lights. You can rent skates and show your moves on the ice!

If you like the thrill of rollercoasters, head immediately to Ruigrijk. Over the past few years multiple new rollercoasters have been added to the collection. Baron 1898 is the scariest of them all, followed by Python, De Vliegende Hollander and Joris en de Draak. Baron 1989 has a free fall with a speed of 90 km/h. For many Dutch kids, Python is probably their first ‘real’ rollercoaster with loops. It’s a huge deal when you finally reach the minimum height of 1.20m and an often-discussed subject in primary school. Python is not as impressive as Baron 1989, but still a fun ride. De Vliegende Hollander is one of the newest rollercoasters and is considered a watercoaster, but you won’t get that wet. The former wooden rollercoaster has been replaced by Joris en de Draak. In this rollercoaster, two rides take off at the same time and you’ll ‘race’ against each other. Tip: if you want to be in the winning team, pick team Water (blue).

Our favorite ride of Anderrijk is the Fata Morgana. The Fata Morgana is an indoor boat ride which takes you through scenes from the Far East. It’s a very entertaining ride and the scenes are full of detail. Other rides in Anderrijk are PandaDroom (a 3D movie), Spookslot (a haunted house) and Bob (a bobsleigh ride).

Fantasierijk houses the newest ride of the Efteling: Symbolica. Unfortunately, we still haven’t been able to go to this one. It’s said to be a surprising and enchanting dark ride. Aquanura is a spectacular water show and is especially beautiful when it’s dark outside. The show times are usually at the end of the day, but they differ from day to day. You can find the show times for a specific day in the Efteling app.

The Efteling is huge so you’ll probably won’t make it to every ride you want to go to. Especially during the weekends, the park can be very crowded and the waiting times for rides long. Nevertheless, it’s absolutely worth it visiting the Efteling when you’re in the Netherlands. Even if you’re a roller coaster lover, don’t forget to go to a few dark rides as they’re so beautifully made in the Efteling. 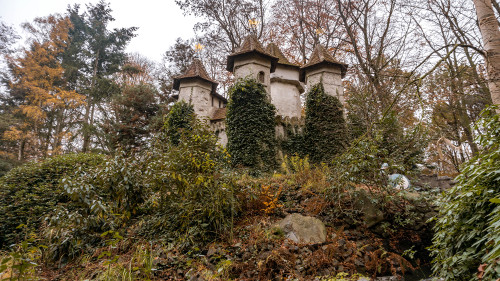 The castle of Sleeping Beauty

How to get to the Efteling from Amsterdam

If you buy your tickets online you get a € 2,- discount.
You can often get tickets with discounts through promotions at Dutch supermarkets (for instance at Albert Heijn or Jumbo). If you’re Dutch or in the Netherlands for a longer period of time, keep an eye out for such promotions. It’s also possible to buy Efteling tickets with Dutch Airmiles.

Check the website for opening times and the crowd calendar. 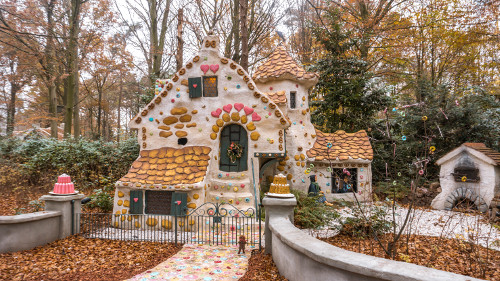 The candy house from the fairytale Hansel and Gretel

Have you been to the Efteling? Let us know in the comments below!

Day trip from Amsterdam: Visiting the tulip fields in and around Lisse

Visiting the cherry blossoms in the Amsterdam Forest

Visiting Kinderdijk in Holland: Everything you need to know