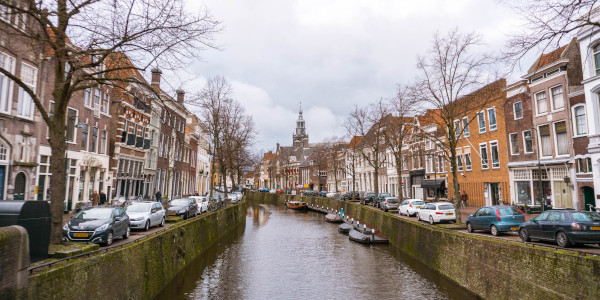 A Day Trip from Amsterdam

Gouda is a town in the South-Holland province in the Netherlands and is of course famous for its cheese. It’s a typically historical Dutch town with plenty of interesting sightseeing spots. Gouda is just a one-hour train ride away from Amsterdam, which makes it a perfect day trip. In this blog, we’re sharing all things to do during a one day trip in Gouda.

Historically, Gouda cheese has been traded on the market square (“De Markt”) in Gouda for centuries. Regional farmers brought their cheeses to the market, where the cheese was weighted, approved and sold. In the second half of the 20th century, the Gouda Cheese Market officially came to an end. Nowadays, there’s an unofficial cheese market as a tourist attraction. It is held every Thursday morning from 10.00-12.30, between April and August.
Buying cheese in Gouda

You don’t have to visit Gouda on a Thursday if you want to try the famous cheese. There are multiple shops open everyday that sell Gouda cheese. Gouds Kaashuis (“Cheese House of Gouda”) is one of them. You can only buy Gouda cheese that’s actually made in the region of Gouda. Besides Gouda cheese, they also sell different kinds of foreign cheeses, stroopwafels and souvenirs. Another place where you can buy Gouda cheese everyday, is ‘t Kaaswinkeltje (“The Little Cheese Shop”). They also sell Gouda cheese made by farmers in the region. You can also buy souvenirs, liquors and wine at this place. Every Saturday, there’s a farmers market in Gouda at the market square (“De Markt” in Dutch). At the market, you can buy fresh products (meats, fruits and vegetables) and of course lots of cheese. It’s a typically Dutch farmers market, which are very common on Saturdays. The market is the perfect spot to try different kinds of (Gouda) cheese. You can also buy the typical fresh Gouda Stroopwafels, as well as regular Dutch stroopwafels. If you’re in Gouda on a Saturday, it’s absolutely worth checking the market out. You’ve probably heard of the famous Dutch syrup waffles, called stroopwafels. The stroopwafels originate from Gouda and it’s believed that the first one was made in 1810 at the Kamphuisen bakery in Gouda. The sweet waffle was a huge success in Gouda, but it took almost 100 years until it became a success outside of Gouda. Back in the day, the waffles were both called stroopwafels and siroopwafels. Technically, stroop and siroop isn’t the same. Siroop has a thinner structure than stroop, which makes it easier to use on waffles. However, every bakery has its own recipe for the siroop or stroop, so a waffle always tastes a little different. The siroopwafels at Kamphuisen are believed to be the original one, so that’s always worth trying. The Kamphuisen Siroopwafel Fabriek (“Kamphuisen Syrup Waffle Factory”) is located on the market square in Gouda. To be honest, the siroopwafel didn’t taste that different from a regular stroopwafel, but it was a delicious waffle for sure. Also located on the market square is the City Hall. The City Hall is a 15th-century building made from natural stone and it’s one of the oldest gothic city halls in the Netherlands. Every 30 minutes, chimes and little figures show how Gouda received its city rights on one side of the building. The chimes date from 1960 and was a gift. We loved the architecture of this building a lot!

During the winter, there’s an ice skate rink around the city hall. We loved ice skating at this iconic location. You can rent skates at the rink, so there’s no need to bring them yourself. Such a fun winter activity! Chimes on the side of the city hall Details of the Gouda City Hall

Another historical building located on the market square is De Waag (old Dutch for weighing scale). De Waag was built in 1668 and the main purpose of the building was to weigh cheese. Nowadays, it houses the Cheese and Crafts Museum, where you can learn about the history of the building, the cheeses that were weighted and traded there and how cheese is made. With its 123 meters, the Sint-Janskerk is the longest church building in the Netherlands. It’s a gothic church built in the 15th and 16th century. The church is famous for its stained glass windows, called the “Goudse Glazen”. Every one of these windows tells a story. We mostly liked the area behind the church, which is literally its name in Dutch: “Achter de Kerk”.

It’s possible to visit the Sint-Janskerk to witness the Goudse Glazen and the interior of the church. View of Sint-Janskerk from 'De Haven' Achter de Kerk is a lovely street behind the Sint-Janskerk with a beautiful view over Museum Gouda and a little canal. When we were there, there was also a bright yellow and pink bicycle which was perfect to take photos with. It was a promotional bicycle from the Museumcafé, so there’s a chance you can still find it. It’s the perfect photo spot! Instagrammable bicycle at the Museumcafé

De Vier Gekroonden (“The Crowned Four”) is a historical building in Gouda. The late gothic building is built in the beginning of the 16th century and shows the story of four martyrs from the 4th century who refused to built a statue of emperor Diocletianus. It’s a beautiful building to take a look at and a photo of. Looierspoort is the narrowest alley in Gouda and it looks so cute. It’s absolutely worth checking out this alley. People still live in the houses in the alley. Can you imagine living so close to your neighbors across the street?! Gouda is home to many cute historical houses and it’s absolutely worth wandering around the streets surrounding the city center. We stumbled upon a very cute house at the crossing of Achter de Vismarkt and Vissteeg. The house looks so cute with the black, white and red shutters, cute bird houses, a painting and a bench. There was also a closet with books for those who want to read a book on the bench. We just had to take a photo of this cute house! The Gouwekerk is located along the canal Hoge Gouwe. The neo gothic church was built between 1902 and 1904. The tower of the church is 80m tall, making it the tallest construction of the town. From the Hoge Gouwe canal, you have a beautiful view of the church together with the canal. It’s a great photo spot. The Gouwekerk isn’t currently open to visitors. Close to the city center you can find a lovely windmill called De Roode Leeuw (The Red Lion). The windmill was built in 1727 and replaced an old wooden mill. We always love checking out the windmills in every place we visit in the Netherlands, so we had to check this one out as well. It’s a lovely photo spot too! Every sightseeing spot in Gouda is in the city center or close to the city center and every place is easy to get to by foot. It’s a nice city to walk around in and this way you’ll stumble upon many pretty spots.

How to get to Gouda

It’s also possible to visit Gouda by car, however, we would always recommend visiting cities by train because of the parking costs in the city center. From Amsterdam, driving to Gouda takes around one hour. From Rotterdam and The Hague the drive is around half an hour.

We hope we’ve inspired you to visit the historical town of Gouda during your stay in the Netherlands. Have you been to the Netherlands or is it on your bucket list? Let us know in the comments below!

One Day in Leiden: All Things To Do

The Most Instagrammable Places in Amsterdam