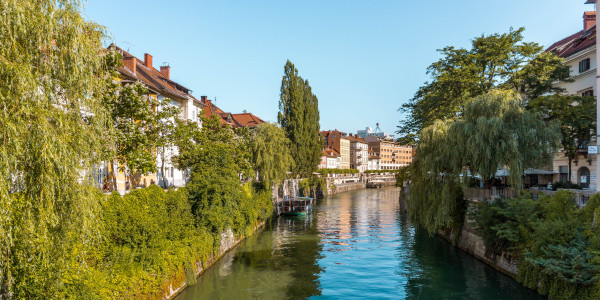 With less than 300.000 inhabitants, Slovenia’s capital Ljubljana is one of the smallest capitals in Europe. However, the city has plenty to offer. In the city center of Ljubljana you can find lots of colored buildings and greenery. There are also lots of restaurants with outdoor seating areas which contribute to the vibrant atmosphere of the capital city. At the same time, the Ljubljanica river flowing right through the city center gives Ljubljana a peaceful vibe. I loved strolling through the city and checking out all the sightseeing spots. In this blog post, I’m sharing the best things to do in Ljubljana.

Slovenia is the first European country that officially ended the pandemic on 14 May 2020. This means that people arriving from European Union countries don’t have to go into quarantine. People arriving from outside the EU are still obliged to go into quarantine for 14 days. Please note that precautions still apply to help prevent the spread of the coronavirus. Some of the places mentioned in this blog might be closed to prevent the spread. We don’t advise anyone to travel when it’s not safe. Check the website of the Ljubljana tourist organisation for more and updated information.

Prešeren Square is Ljubljana’s main square and it’s the former entrance to the walled city of Ljubljana. The square features a statue of France Prešeren (Prešeren Monument), a Slovenian poet who lived from 1800-1849. Other important buildings located on the square are Frisch House, Seunig House, Urbanc House, Hauptman House (Hauptmanova hiša) and Mayer Palace, all bourgeois palaces that were built after the earthquake in 1895. The most eye-catching structures on the Prešeren Square are the Franciscan Church of the Annunciation and the Triple Bridge. When I visited Ljubljana, constructions were taking place at the square.

Franciscan Church of the Annunciation

The Franciscan Church of the Annunciation is a Franciscan church and was built between 1646 and 1660 in baroque style. The red color of the church is a symbol for the Franciscan monastic order, however, the color is more of a pink tone in real life. As pink is my favorite color, I was very excited to see this church with my own eyes. It’s possible to take a look inside the church as well, but I just admired the (pink) beauty from the outside. The Triple Bridge is a collection of three bridges next to each other and connects the historical part to the modern part of the city. The Triple bridge is designed by Jože Plečnik and is considered one of his most famous works. Jože Plečnik was a famous Slovenian architect and you’ll find many of his works in Ljubljana. It’s hard to capture the construction of the three bridges from ground level, but it’s worth taking a look at the bridge during your visit to Ljubljana. Because of its central location, you’ll probably cross this bridge anyway. View from the Triple Bridge

Crossing the Triple Bridge and going straight ahead, you’ll walk towards the Town Hall. The Town Hall houses the City Municipality of Ljubljana. The original building was built in 1484, but renovated between 1717 and 1719. During the renovation, Venetian inspired baroque elements were added to the originally Gothic style building. The Town Hall features four exhibition spaces to showcase projects by the Municipality of Ljubljana, but also fine art. If you want to do a Town Hall tour, be sure to book it in advance at the Tourist Information Center. The fountain in front of the Town Hall is the Robba Fountain, which was designed and made in 1751 by Francesco Robba, an Italian sculptor. The three men on the fountain represent the gods of the three rivers of Carniola: Ljubljanica, Sava and Krka, and also represent the three territorial units of Carniola: Upper Carniola, Lower Carniola and Inner Carniola. Carniola was the historical region that consisted of parts of present-day Slovenia. The steps surrounding the fountain represent the mountains of Carniola. The fountain in front of the Town Hall is a replica. If you want to see the original fountain, you have to go to the National Gallery of Slovenia where it’s currently located. Ljubljana Cathedral (or St. Nicholas’ Cathedral) is located at Cyril and Methodius Square. Originally, the Ljubljana Cathedral was a gothic church, but the current cathedral was built between 1701 and 1706 by design of Andrea Pozzo in baroque style. The green dome was built much later, in 1841. The interior of the cathedral is also decorated in baroque style. This interior is beautiful and really worth checking out, even though I didn’t go inside the cathedral myself. If you want to see the interior of the cathedral, make sure to plan your visit as there are lots of services held everyday, during which you cannot enter the church for a visit. Ljubljana Castle is the city’s most well-known sightseeing spot in Ljubljana. It’s a medieval fortress located in the city center on Castle Hill. The castle was built in the 12th century and has elements of Romanesque, Gothic and Renaissance architecture. The Outlook Tower was my favorite part of the castle. From up there, you have an amazing view over the city. Besides the amazing view, there’s also a museum on Slovenian history, a puppet museum, art exhibitions and two restaurants. You can get up the castle by taking the funicular or by walking up the stairs. Besides the Triple Bridge, Ljubljana has a few more bridges worth mentioning. One of them is the Cobbler’s Bridge, which also called the Shoemakers’ Bridge. The Cobbler’s Bridge is one of the oldest bridges of the city. It used to be a wooden bridge with a butchers shop on it. Due to the strong smell of meat, the butchers shop was relocated and shoemakers moved in the booths on the bridge. The bridge has been reconstructed multiple times. The current stone bridge was designed in 1931 by Jože Plečnik. The current bridge is decorated by Corinthian and Ionian pillars. The Corinthian pillars delineate the shape of the bridge and the Ionian pillars bear the lamps. The Dragon Bridge features sculptures of dragons, which are a symbol of Ljubljana ever since the late Middle Ages. The bridge was built between 1900 and 1901 and according to original designs, it was supposed to be decorated with winged lions instead of dragons. Legend says that Ljubljana was founded by Jason, a hero in Greek mythology, who fled across the Black Sea, up the Danube river, up the Sava river before eventually reaching Ljubljanica. They carried their ship overland to the Adriatic coast to set back sail to Greece. At a lake near the source of Ljubljanica, they found a dragon which Jason fought and killed. From initially being portrayed as a monster, the dragon transformed into a symbolic protector of the city, embodying power, wisdom and courage over time. The Dragon Bridge is always crowded with people taking photos of the dragons.

The Butchers’ Bridge is located next to the Dragon Bridge and is decorated with mythological bronze sculptures from Ancient Greek mythology and Biblical stories (Adam and Eve, Satyr and Prometheus). Besides the bronze sculptures, the bridge is also decorated with lots of love padlocks. Plans for constructing a bridge with the same name were already made in 1930 by Jože Plečnik. However, the bridge was never built because of WWII. The current bridge was opened in July 2010 and was designed by Jurji Kobe and decorated with works from sculptor Jakov Brdar. The Butcher’s Bridge leads to the Central Market which is a daily market with both an open-air market as well as a covered market. You can find the open-air market on the Vodnikov trg and Pogačarnev trg squares and the covered market between those squares and along the river Ljubljanica. The Plečnik’s Covered Market is a two-storey market hall which features a fish restaurant and an art gallery on the ground floor. On the upper floor, you can find shops offering Slovenian products and places where you can have a bite. At the Central Market you can find a variety of products, including fresh fruits, vegetables, cured meat, fresh meat, pastries, cheeses, dried fruits and nuts, flowers and plants. It’s nice to walk around the Central Market and maybe even try out some local food. Tivoli Park is the largest park in Ljubljana and was designed in 1813 by Jean Blanchard. Between 1921 and 1939 the park was renovated by Jože Plečnik. Tivoli Park is a lovely place to wander around and there are multiple things to do and see within the park as well.

The Jakopič Promenade has become a venue for outdoor exhibitions of large-format photographs. At the end of to the Jakopič Promenade, you’ll find the Tivoli Castle. Tivoli Castle is a mansion built in the 17th century. The mansion was renovated in the 19th century by Joseph Radetzky in Neoclassical style. In the northern edge of the park, you can find the Cekin Mansion which currently houses the national museum of contemporary history. The Tivoli Pond is located close to the Botanical Garden. The pond has been used for recreation, fishing and as a reservoir for flood-control. There’s a small stone sculpture in the pond called Ribe, which means fish. It’s a representation of two vertically standing fish. There’s an open-air library on the lawn next to the pond. During winter, the library moves into the greenhouse. Check this website for current opening hours and prices. Every evening, I ended the day with an ice cream from Cacao. I haven’t tried any other ice cream shops, but you can’t go wrong at Cacao. The ice cream is delicious and creamy, and they have lots of flavors to choose from. Really loved ending the day like this. You most probably have to queue, but it’s well worth the wait. There’s also an outdoor seating area where you can order ice cream coupes and drinks. During your visit to Ljubljana, you probably don’t need to use the public transport as all the sightseeing spots are located in the city center. I used the bus to get to the swimming pool. You need an Urbana card if you want to travel with the Ljubljana city buses. You can buy an Urbana card at the tourist information centers, most newspaper kiosks and post offices. The Urbana card is €2 and you have to top up the card with an amount up to €50. The fare of a single ride is €1,30. If you buy the Urbana card at the tourist information center and keep the receipt, you can get your €2 back when you return the card after you no longer need it.

If you want to use the public transport on a Sunday, don’t forget to buy the Urbana card in advance. All tourist information offices, news kiosks and post offices are closed on Sunday.

The Most Instagrammable Places at Lake Bohinj

All Things To Do at Lake Bled