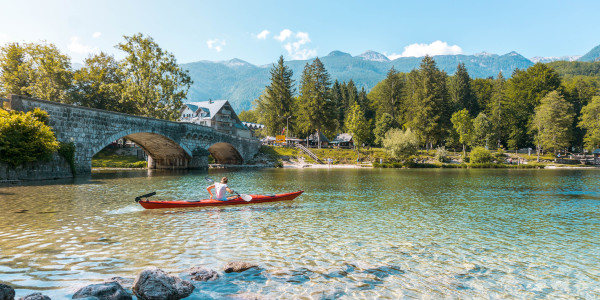 Lake Bohinj is one of the most stunning places I’ve ever been. The crystal-clear water and the perfect backdrop of the mountains just took my breath away. Lake Bohinj is by far not as touristy as Lake Bled and is mostly visited by hikers and mountain bikers. Being located in the Triglav National Park, Slovenia’s only national park, it’s the perfect starting place for some incredible hikes. I visited Lake Bohinj on a solo trip at the end of June in 2019, and this is my complete guide for the area!

Slovenia officially ended the pandemic on 14 May 2020. People arriving from European Union countries don’t have to go into quarantine. People arriving from outside the EU are still obliged to go into quarantine for 14 days. Please note that precautions still apply to help prevent the spread of the coronavirus. Some of the places mentioned in this blog might be closed to prevent the spread. We don’t advise anyone to travel when it’s not safe. Check the website of the Slovenian tourism board for more information. Check the website of the tourist office in Bohinj for specific information about attractions in the Bohinj area. I arrived at Lake Bohinj in the morning and decided to take it relatively easy. (Spoiler: it didn’t turn out to be that easy though…) After dropping my bags off at the guest house I was staying at, in Stara Fužina, I decided to go for an “easy” hike to Mostnica Gorge and the Voje Valley. This hike is easy in terms of (lack of) inclination, but it’s still a pretty long hike.

The Mostnica Gorge is a beautiful and impressive gorge, stretching two kilometers through and over rocks. The water is crystal-clear and the surroundings of the gorge are very green. The gorge is easily reachable from the village of Stara Fužina and the trail to get there is well marked. The route suggested by Google Maps is very reliable as well. There’s a trail on both sides of the gorge, so you can make it a roundtrip. What I really liked about this gorge is that you can also get very close to the water, sitting on the rocks right next to it. I even saw some people sunbathing on the rocks, laying on towels and reading a book.

There’s an entrance fee from Mid-March until the end of October.
Adults: €3
Students: €2,50

At the end of the Mostnica Gorge, there’s a path through the forest leading to the Voje Valley. There’s an alpine hut located at the start of the valley (Koca na Vojah) where you can get something to eat and/or drink. There’s another alpine hut located at the end of the valley, the Voje Waterfall Alpine Hut. After the second alpine hut, there’s a path leading to the 21m high Voje waterfall (also called Mostnica waterfall). Including the walk through the Mostnica Gorge, it’s approximately a 2,5-hour hike to reach the waterfall (one direction). The trail is easy and well-marked. After a long walk through the hot valley, I had a goulash soup at the Voje Waterfall Alpine Hut, which was very good. After many photo stops and a lunch break, I reached the waterfall after 3 hours. I was the only one at the waterfall at that time which was great for setting up the tripod and taking photos. The walk back to Stara Fužina took me a little over 2 hours without any breaks. Even though the trail isn’t hard, it’s long and it was very hot (30 degrees Celsius). This made it very tiring, especially in the valley which has no shade at all. Make sure to bring lots of water and sunscreen if you’re doing this hike during summer! On the second day I decided to really take it easy, as that didn’t go as planned the day before. My feet were still tired from the long hike through the Mostnica Gorge and Voje Valley. In the morning, I did a small hike to the viewpoint of hill Peč, a hill nearby the village I was staying in. After the hike, I spend the remainder of the morning and the afternoon at the lake.

Getting to the viewpoint of hill Peč is an easy and short hike and the view is very rewarding. The trail is well-marked and it’s about 20 minutes to get to the viewpoint from the starting point of the trail. It’s a perfect morning activity. The sun shines beautifully over the lake in the morning, which is great for photos. The trail gets pretty steep though at some parts and it can get slippery when it’s wet. Even though I did the hike in the morning, it was already reaching 30 degrees so it was still very hot when getting up. You can extend your hike to Rudnica, but my legs were still tired from the day before so I went back down. It takes about an hour to reach Rudnica. After the short hike, I looked for a spot to lay down at the lake. The crystal-clear water of Lake Bohinj looks so inviting to swim in, especially on a hot summer day. You’re allowed to swim everywhere in the lake and there are lots of grass fields to lay your towel on. I usually went for a swim at the eastern side of the lake, which is closest to the village I was staying at. Be aware that the northern side of the lake is a nudist area. I had a perfect relaxing afternoon, sunbathing and swimming in the lake. The bottom of the lake consists of small rocks, so you might want to bring water shoes if you have sensitive feet. I forgot to bring mine, but I was doing fine without water shoes. If you’re swimming, you don’t feel the bottom of the lake anyway. The water temperature was perfect at the end of June, not too warm and not too cold. It was the perfect refreshment on a hot day! My third day at Lake Bohinj would be my big hiking day. I was planning on doing a long day hike, which turned out to be even longer than expected. I left my guest house at 8 in the morning and returned over 13 hours later at 21:15. I don’t think my body had ever been that tired. To read about my personal experiences of this extreme day, check out this blog. Here, I will tell you about the trails I took.

The hike to the Vogar viewpoint was my first trail of the day. In my opinion, Vogar is the most rewarding hike I did at Lake Bohinj. The trail starts near Stara Fužina and it’s very steep which makes it pretty hard. I found the starting point of the trail using Google Maps, but Maps doesn’t know the exact trail to Vogar. Once you’ve found the signs and marks, follow those and don’t rely on Maps anymore. I left early in the morning to beat the heat, but it was already 26 degrees at 8 in the morning so that didn’t really work out. After taking lots of photos I continued the trail to a hiking cottage, which is about a 15-minute walk to reach. The second viewpoint can be reached by following a short trail east past the hiking cottage. This viewpoint offers a view over the western part of the lake, which is beautiful as well, especially the mountains in the background. At the hiking cottage you can eat and drink something. I had some fried eggs before I continued my hike to the next mountain.

From Vogar I continued the trail to Pršivec, which is a 2,5-hour trail. The first hour of the trail is not that steep but at the end of the trail you need to climb a bit. The trail is well-marked, but I still managed to get lost twice. My advice when getting lost: don’t try to find your way back to the trail by using Google Maps. The trail on Maps is not accurate and you’ll find yourself wandering through a steep forest, climbing trees and hurting your legs on branches. If you haven’t seen a marker for a while and it feels like the path gets less comfortable to walk on (lots of loose branches, many trees blocking the path, etc.), go immediately back to where you’ve seen the last marker! Don’t be like me and wander around the forest.

I was very relieved when I got to the top, after almost 3 hours. Before reaching the top, there are many beautiful viewpoints. I stopped very often to take photos. From Pršivec you can either take the same route back to Vogar and ultimately back to Stara Fužina, or to take a round trip through Planina Viševnik, Črno Jezero (Black Lake) and down to Koča pri Savici which is close to the Savica Waterfall. From there you can walk to Ukanc, which is a village located on the west side of the lake, and take the trail on the north side of the lake back to Stara Fužina. Please note that the round trip is long and it takes over 5 hours from Pršivec to Stara Fužina. Don’t do this if you aren’t prepared for it (I found out the hard way).

I was very relieved that I made it safe and sound back at my guest house just after sunset. I hope you enjoyed this three-day itinerary at Lake Bohinj and that I inspired you to plan a trip to this stunning area of Slovenia. Despite my “not so good” hiking experience, I had such a great time at Lake Bohinj. It’s one of my favorite destinations in Europe and I can’t wait to return and show Joop the beauty of the Slovenian Alps.

Is Lake Bohinj on your travel list? Let us know in the comments below!

All Things To Do at Lake Bled