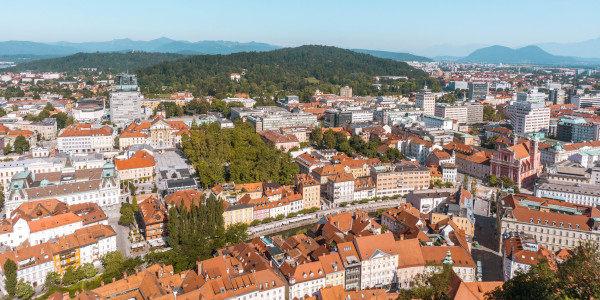 Ljubljana Castle is one of the city’s main sightseeing spots. During your visit to the castle, you can explore its, and Ljubljana’s, rich history. The current castle was built in the 12th century, but there have been living settlements on the Castle Hill since 2000 BC. The castle offers different kinds of exhibitions, where you can learn about different aspects of Slovenian history. From up the Viewing Tower, you have an incredible view over the city. Ljubljana Castle is a must to visit during your stay in Ljubljana. In this blog post, I’m sharing all the ins and outs you need to know about visiting the castle, as well as some of the history of Ljubljana Castle.

Ljubljana Castle is built on top of Castle Hill. Historically, Castle Hill was a safe place to live long before the castle was built. The first settlements date back to the year 2000 BC. Conditions at Castle Hill were favorable to live. There were forests for wood, grasslands for deer to eat and lots of fish in the Ljubljanica river.

In the Roman era, the city of Emona was built on the left bank of Ljubljanica. The city walls of Emona were built in 14 and 15 AD. Remains of Emona date back from the 1st to the 4th century AD. The Huns invaded the city in the 5th century and destroyed it. After that, Ljubljana and its surroundings are not mentioned again until 1106.

In 1106, the Carinthian aristocratic family Spanheim owned Ljubljana (Laibach in German) and Castle Hill. During that time, there was a wooden fortress built on the hill, called Spanheim Castle. Spanheim Castle probably wasn’t just a fortress but also a noble mansion. In 1270, Hungarian king Otokar II Premysl conquered the Spanheim City and Castle.

In 1355, Carniola (Ljubljana at that time) became property of the Habsburgs. In the 15th century, fortification of the castle was important because of the invasion of the Turks. The old Spanheim Castle was completely demolished to build an entirely new castle. The area of the castle expanded, it was adapted to the use of new firearms and the Pentagonal Tower was added. The St. George Chapel was built in 1489 and is one of the oldest preserved parts of the Castle. Except for the walls, corner towers and the St. George Chapel, the other structures of the castle were built in the 16th and 17th century. Residential structures were built for emperors along the fortress walls. In the 17th century, the Castle lost its function as a fortress and residence and was used as a military warehouse. Ljubljana Castle has lots of spaces serving different purposes throughout the years.

The new viewing tower with the clock was built between 1845 and 1848 and replaced an old wooden tower. The fireguard lived in the viewing tower and would fire a cannon when there was a fire in the city. Today, the tower’s main purpose is to offer a panoramic view of the city, which is amazing. You can’t visit the castle without going up the Viewing Tower to enjoy the view. The Pipers’ Tower is the one right next to the Viewing Tower. The Pipers’ Tower was first mentioned in 1544. It was tradition for the town pipers to sound three trombones and a clarinet from the wooden gallery around the tower, every morning at 11 o’clock. This tradition was probably observed in the 16th and 17th centuries. The town pipers were also watchmen and responsible for fire safety in the city.

The Archers’ Tower dates back to the 15th century. From 1946 to 1953, the tower was renovated by architect Boris Kobe. A beer hall was made on the ground floor, and a coffee house on the upper floor. The wall paintings were made by Marij Pregelj. From 2007 to 2012, renovations of the Archers’ Tower took place. Currently, the entrance area houses the Ljubljana seat of the Wine Convent of St. Urban and the upper level houses the Strelec Restaurant.

The Pentagonal Tower used to be the main entrance to the Castle Courtyard from the 16th century. The upper level used to be the residence of the castle keeper. Nowadays, the upper level of the tower is an open loft and is dedicated to exhibitions, smaller concerts and theatrical performances. The Frederick’s Tower is located between the Estates Hall and Palatium and used to be the rooms of the castle mistress. The Medieval rooms has been entirely preserved.

The Estates Hall used to be the living space of the provincial governor at the castle. There used to be a small housekeeper’s room, a large room with a study, servant’s quarters and a guardroom. Currently, all of these rooms are combined into one space.

In the Palatium, the former principal governor performed duties of office and held formal receptions. The Palatium was renovated in 2003, retaining its Medieval form and Renaissance bay windows.

You can find preserved solitary confinement cells right below the Palatium. At the Penitentiary, you can learn more about the historical prison conditions and about well-known Slovenes that served time in the castle prison.

The Castle Courtyard is spacious and has a typical irregular Gothic layout. The courtyard is currently used for various kinds of events.

The Gunpowder Room is located between the St. George Chapel and the Armory. The room was built in the 15th century and is believed to be one of the first castle rooms. In the 15th century, a charcoal mill for gunpowder was placed in this room. In the 19th century, when the castle served as a prison, workshops were located in this room. Nowadays, the Gunpowder Room houses the Permanent Exhibition of Slovenian History.

The Open-Air Prison is accessible from the courtyard, from where the prisoners were lowered into the prison with a rope or chain. The space had no roof and was closed with iron bars above the prisoners’ head. Prisoners were confined to this very small space with chains around their ankles and had to conduct all of their basic human needs in this space. Because of the small space and no roof, the prisoners lived in extremely difficult conditions.

Other spaces in the castle are the Blue and White Halls, the Upper Lapidarium, the Rock Hall, the Erasmus Tower and the Dragon’s Den. There are lots of experiences and exhibitions offered at the castle which all give an insight to the rich history of the castle.

With the Time Machine, you can get to know the castle through experience instead of a guided tour. You’ll travel through six periods of time and at each time period, a dressed actor representing a specific period of time will give you an insight in that period. It’s a theatrical experience that will learn you the history of the castle and Ljubljana in a fun way.

Another theatrical experience is the Behind Bars experience, in which you’ll travel through time and meet prisoners from various periods of time. Behind Bars shows an interesting experience of the castle’s dark parts of the history.

Escape Castle is a fun game with escape room elements. While trying to escape, you’ll learn about the history of the castle. It’s such a unique location and setting for an escape room game!

With the audio guide you can learn about the history of the castle, as well as listen to stories of individuals that were important to the development of Ljubljana Castle. The audio guide is also available at the Permanent Exhibition of Slovenian History, the Museum of Puppetry and the Virtual Castle.

Nexto is a mobile app that is an addition to the traditional audio guide. The app detects your location and points out the attractions close to you. As the name suggests, this exhibition teaches you about the rich history of Slovenia. Present-day territory of Slovenia has been a meeting point of different cultures and people since ancient times.

In the Virtual Castle you can take a virtual look into the castle’s history. It’s a 12-minute projection about the history of Ljubljana Castle located in the Viewing Tower. The projection shows the architectural development and archaeological findings from the prehistory until now.

For me, the Viewing Tower was the highlight of my visit to the Ljubljana Castle. You can climb the stairs and at the top of the tower you’re greeted with an amazing view over the city. I spent quite some time up there and took photos from every angle possible. The view over the orange-roofed buildings, Ljubljanica, all the greenery and the Slovenian Alps in the background is just incredible. Going up the Viewing Tower is a must when visiting the castle. In the penitentiary below the Palatium, you can visit four formerly solitary confinement cells. The first cell gives a sense of the scope of the penitentiary. The second and third cells are dedicated to a chronological representation of punishment phases. The fourth cell contains a hologram of a prisoner.

In the Erasmus Tower, you can find replicas of weapons that were used in Slovenia at the end of the Middle Ages. How to get to Ljubljana Castle

Ljubljana Castle is located in the heart of the city center and it’s quite hard to miss. You can get up the castle either by funicular or by foot.

The easiest way to get to Ljubljana Castle is by funicular. The funicular takes you up the hill in just a few minutes. The lower station is located at Krekov trg. A single ride ticket costs €2,20, a return ticket is €4. There are also combination tickets available including entrance to the castle’s exhibitions. There are four different walking paths to get up the Castle Hill. The first walking path starts at Central Market, from where you can take the path to Študentovska pot, which is a 10-minute walk uphill.

The second walking path starts at the bus stop at the Upper Square, from where you have to walk towards Old Square, cross Levstik Square and turn into an alley called ulica Reber. From here, you’ll reach the castle in a few minutes.

The third walking path also starts at the bus stop at the Upper Square, from where you cross Levstik Square to Rožna ulica, past the Church of St. Florian and straight to the street Ulica na grad. Turn right after 100 meters onto Osojna pot and in 10 minutes walking uphill you’ll reach the castle.

The fourth walking path starts at the bus stop again. Head towards the Ljubljana Puppet Theater, climb the stairs before the tunnel that lead to Stolba. In 10 minutes, you’ll reach the beginning of Castle Avenue.

I took the third walking path, which was most convenient from where I was in the city. It was a pleasant walk uphill with lots of shade and beautiful views along the way. I used Google Maps for the directions, which were accurate. Once up the hill, the directions are very straightforward. View along the walking path up the hill

You can visit the Castle Courtyard without buying a ticket or entrance fee. This makes it possible to enjoy a cup of coffee at the coffee house and enjoy the beautiful surroundings of the courtyard. However, in order to visit the exhibitions and Viewing Tower, you have to buy a ticket.

There are multiple kinds of tickets available, depending on what you want to do and see in the castle. Castle tickets include the Museum of Puppetry, Viewing Tower and Virtual Castle and the Exhibition of Slovenian History. Castle tickets are available with or without funicular tickets and audio guides. Special experiences such as the Time Machine and Behind Bars tours, require separate tickets. I hope I’ve provided you with all the information you need to plan your visit to Ljubljana Castle. Is visiting Ljubljana on your bucket list? Let us know in the comments below!

The Best Things To Do in Ljubljana